What is Growth Hacking (and Why Should You Care?)

What is Growth Hacking?

Yup, it’s a buzzword that people like to toss out there.

Right along with ‘virality’, ‘big data’ and ‘social commerce’.

We are just as sick of the overuse of marketing jargon as you.

If you take a step back, the core principles that go into growth hacking are pretty spot on for today’s digital marketing world. The skill set of a true “Growth Hacker” could be the game changer your company needs to start growing the right way.  That’s why you might care.  Now, lets start from the beginning.

What is Growth Hacking?

In 2010, the Head of Growth at Dropbox, Sean Ellis, was looking for his replacement and all the marketing candidates just weren’t cutting it. That’s when he decided that he needed a “Growth Hacker”.

Backstory: Sean led the Dropbox growth team that came up with the referral marketing engine pictured below. Simply put, you could pay for dropbox OR invite friends and continue to use their cloud storage software for free. This one referral mechanism was their number one driver of user acquisition.

As Sean was looking for his replacement, he decided he didn’t need a VP of Marketing.  Instead, he needed a “Growth Hacker”. He tried to define this term with the following:

“After product-market fit and an efficient conversion process, they find scalable, repeatable and sustainable ways to grow the business.” – Sean Ellis

The skill sets that make up this savvy marketer are the following: 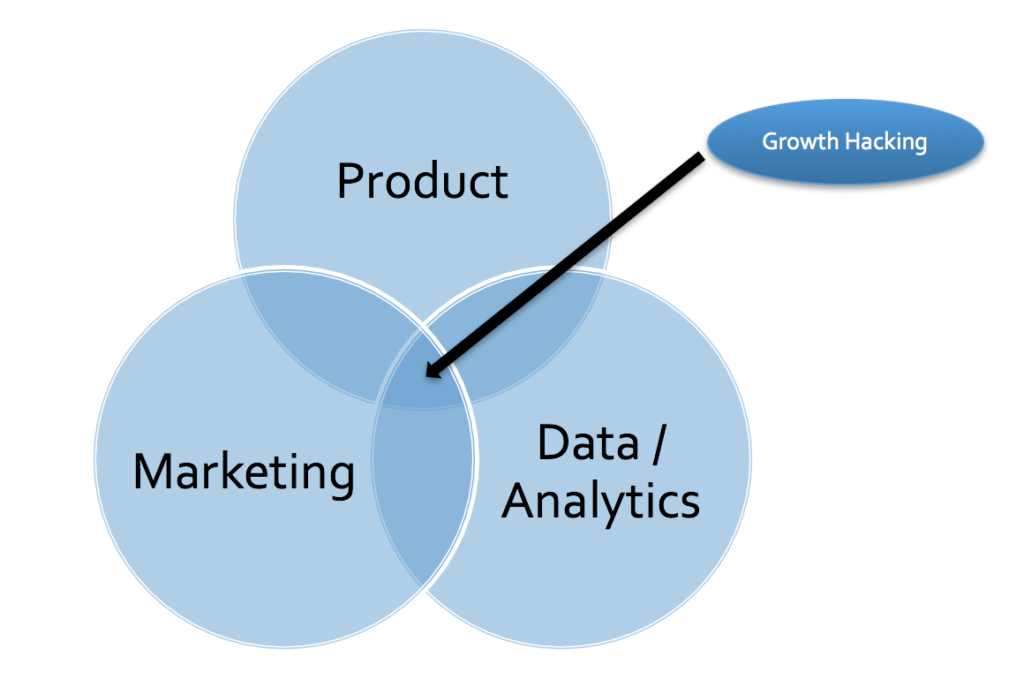 This phrase started to make sense to us but what really made it resonated with us was the idea of distribution.  Growth hacking is when you build distribution into the product experience.  Essentially, it’s a person or team that seamlessly weaves their growth mechanism into the product.  To put more color on that idea, here are four examples:

Hotmail was one of the first webmail solutions.  They had a great product but had trouble getting traction.  They tested banners ads and even contemplated billboards.  Traditional marketing wasn’t working. Then their VC firm came up with the idea of customizing their email signature to say “PS: I love you. Get your free e-mail at Hotmail.”  This wouldn’t hit a huge number of people with any one email. (Most emails are one to one.) However, the frequency was so strong that it was guaranteed to get people’s attention. After they launched this email signature they grew to 12 million users in 18 months and got acquired for $500 million. 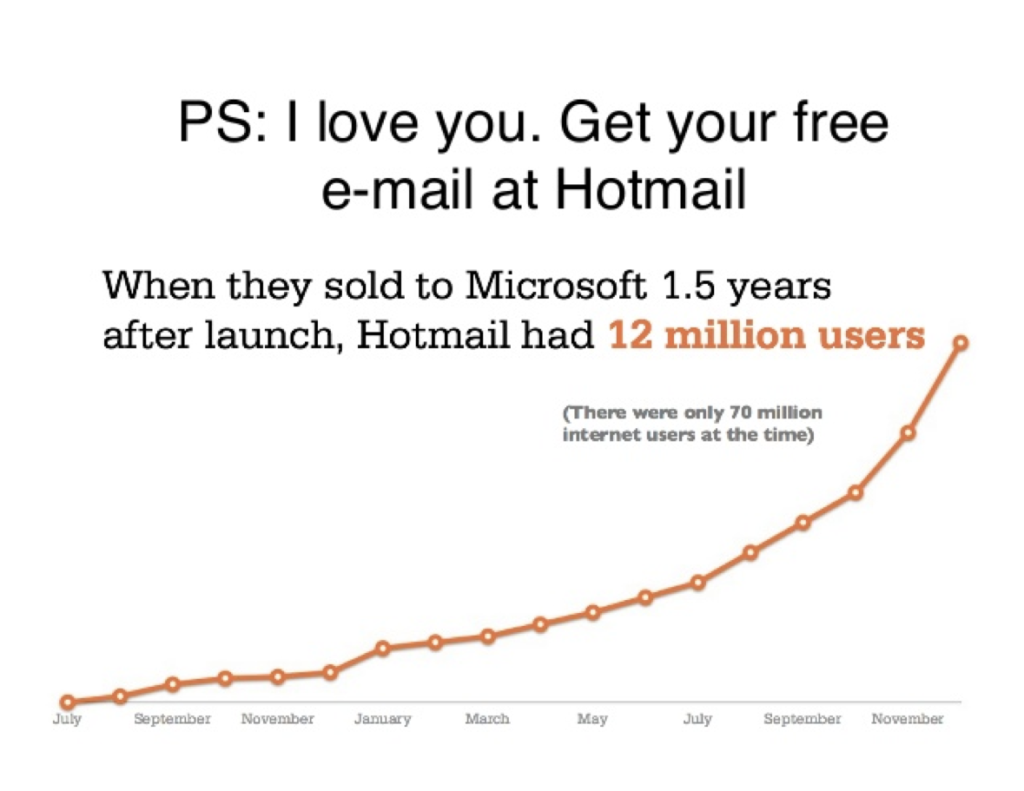 Linkedin is a social network for professionals.  (Just in case you don’t know.)  They determined that the most valuable thing to a user is their network.  The more connections you have the more networking and business opportunities come up.  They saw that people would sign up and immediately get 5-7 connections but the executive team knew there were more.  Their team came up with the idea to allow users to upload their address book.  This took first-time users from around 5 connections to an average of 75 connections on day one.  This move helped first-time users quickly get the value out of platform and become users for life.

When Evernote launched their mobile app they did it right as the Apple App store was starting to take off.  Their app got featured on the front page of the app store. The result was thousands of downloads within one day.  After that, they decided to always time their new product launches with any new iphone or Apple product release.  They saw the Apple app store as this new distribution channel.  Their CEO said: “We really killed ourselves in the first couple of years to always be in all of the app store launches on day one.” Their hard work paid off and they averaged 19,000 new sign-ups per day

Hitlist is a travel site that offers you the cheapest airfare if you’re up for going anywhere in the world. Great idea but a very competitive market.  (I wouldn’t want to go against the marketing budgets of an Expedia, TripAdvisor or Priceline.) They knew that traditional marketing channels like PPC and SEO wouldn’t work. Their head of product came up with the idea to create a chrome extension. (Pictured below.) The extension, Wandertab, shows you the photo and airfare for an exotic location you could visit based on your current location.  The tab was featured in the Chrome store and then it was voted to #1 on ProductHunt.  This new product became the number one driver of new users. 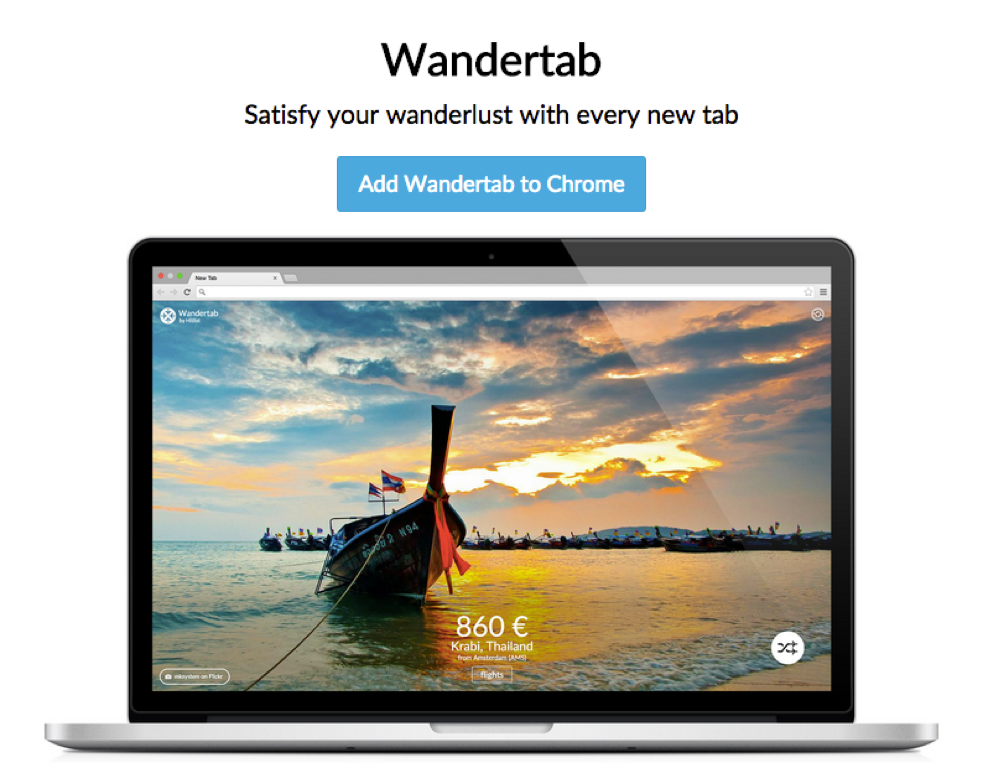 So, What is Growth Hacking – and Should I Care?

Growth hacking is a when you use the skills of data, product and digital marketing to drive one thing: growth.  That could be sales or that could be acquiring new users.  Regardless of what you think of the term growth hacking, the principles of it are pretty strong. It could be worth doing some more research on “Growth Hacking.”

Want more info on growth marketing? Here are our favorite resources for growing your startup.

How do you grow and market a D2C brand from idea to 8 figures? After working with 100+ brands at my growth agency, I have…

The Right Launch Strategy Can Make You Millions

How To Choose a Conversion Rate Optimization Agency

You may think you’ve mastered SEO because you’re getting the number of visitors and clicks you want, but that’s only the initial step of…

TikTok Advertising: Is It for You?

TikTok is probably the most-used social media platform, mainly due to its easily digestible content and fast-paced trends. The entertainment experience on TikTok is…

How To Calculate Your Customer Acquisition Cost

Today, many web-based businesses use highly-targeted marketing strategies to track consumers, attract them, and turn them into returning customers. Customer acquisition cost (CAC) is…

Tips for Advertising on Social Media

Paid Social vs Organic Social: Which Is Best For You?

Social media marketing has significantly evolved over the last two decades. Both organic and paid social media content continue to evolve with each passing…

How Pinterest Ads Work and How You Should Use Them

6 Ways To Get the Most Out of Your Google Ads

If you plan to spend your money on ad campaigns, we suggest you do it in the right place. That is a forum that…

The #1 Newsletter for Growth Marketers & CEOs

The best kept secrets in growth. Every Thursday you’ll get:

This is more useful than my MBA program
It helped me get a raise!
It just makes me feel smarter.
×

The #1 Newsletter for Growth Marketers & CEOs

The best kept secrets in growth. Every Thursday you'll get:

This is more useful than my MBA program

This newsletter helped me get a raise!

It just makes me feel smarter.